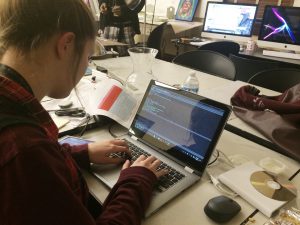 Hailey Randolph, a Visual Arts class of 2018 student at Mississippi School of the Arts, surfaced her computer and got down to the grit with computer programming in her visual arts class. “I’m designing a game with multiple levels,” said Randolph. Her preferred programming language is Java, especially since that is the language she learned from her father.

Java, a computer language used world-wide, allows software developers to create applications that can be supported on many different operating systems without the need of re-compiling code for specific needs, which can be costly. Java was originally developed by James Gosling, a computer scientist of Sun Microsystems, before being acquired by Oracle Corporation. Now, java is used for millions of software development projects around the world, including your smartphone device.

Computer programming is not required at Mississippi School of the Arts, but Hailey has found a way to incorporate it into her learning environment. In visual arts, game design is a growing field with many artists graduating and becoming graphic designers in the gaming industry, a field of programming languages that require advanced logic and understanding. That’s just what Max Hancock decided to do. Max, a graduate of Mississippi School of the Arts, now enjoys a career as a graphic artist and designer at Nintendo America in Seattle, Washington.

Although game design is not in Hailey’s future plan, her acquisition of Java and computer code logic may help her in the future. “I want to go into the medical field,” she said. Perhaps her ability to code and visual design concepts may lead to modern marvels in computer software and hardware in the healthcare field. 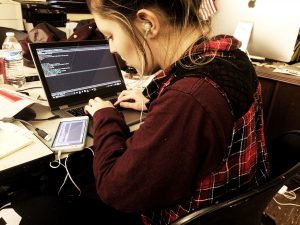 Today, a rising number of women are entering the technology field, but there’s work to do. That’s where “Girls Who Code” comes into play. The non-profit organization is “dedicated to closing the gender gap in technology.” Basically, Girls Who Code exposes young teenage girls to computer programming and technology in hopes to push them into the technology field. According to their web site and other data, tech jobs are among the fastest growing in the country.

“Girls Who Code has gone from 20 girls in New York to 10,000 girls in 42 states. That’s the same number of girls who graduate each year with a degree in computer science. That’s progress! I’m proud to say we’re not just aiming to close the gender gap in tech — we’re actually doing it. When girls learn to code, they become change agents in their communities. Whether it’s a game to illustrate the experience of an undocumented immigrant or a website to provide free college prep, our girls create technology that makes the world a better place. Like us, you believed in girls’ unlimited potential.” said Reshma Saujani (founder of Girls Who Code organization).