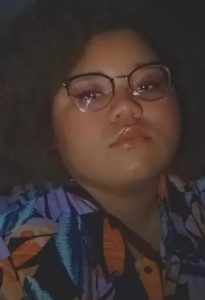 Azya Lyons, a senior literary student from Jackson, MS, was selected as one of seven in the country to present “Togetha,” a play about gun violence. Azya is the recipient of 2 Silver Keys in Scholastics, has been published in 2 literary journals, and has won a national poetry contest.

#ENOUGH Plays to End Gun Violence, LLC, an organization inspired to help end gun violence, produced a Nationwide Reading–a staged reading of the winning #ENOUGH plays in communities all across the country on December 14, 2020, the 8-year remembrance of the shootings at Sandy Hook.

“My play was honestly kind of hard to write, beings that it was so easy to personalize it and I couldn’t if I wanted to improve upon it. I decided to focus on gun violence within the black community because that’s what I grew up around and I know that there’s a lot of potential in those types of stories,” explained Lyons to the #ENOUGH Project.

Azya’s play, Togetha, has garnered national attention with feedback from some of the most respected playwrights and critics in the industry.

DAVID HENRY HWANG: “This play uses dialogue beautifully and brings four friends to striking life, creating characters and a situation which feels very real, until the moment of their celebration is unexpectedly shattered forever. The piece works fine as is, but I do have one tiny note: wondering why no one has a cell phone. Perhaps rather than having Imani exit, she could be on the phone, so all four characters are visible when the play ends? I would love to hear this language come to life, congrats!”

TARELL ALVIN MCCRANEY: “A heartbreaking story, built up the love and camaraderie really nicely. Would love to have felt more joy and wonder and togetherness so that the shock was truly unexpected.”

ROBERT SCHENKKAN: “Beautiful work. Character descriptions at top both short and revealing. Wonderful dialogue, expertly realized. Gives us a real sense of person and makes the audience care. Skillful management of violence and aftermath. This is very impressive writing.”

MICHAEL COTEY, #ENOUGH Producer: “Excellent use of dialogue between the characters. Really really well-written, each character has a distinct personality. Excellent relationships – and funny, which makes the randomness of the violence even more heart-breaking and tragic. Great great work!“

“This is a really big deal,“ said Clinnesha Sibley, Literary instructor at Mississippi School of the Arts and an award-winning playwright. “Azya’s play is in front of a national audience and it’s going to be seen by a lot of people with influence. I’m really excited for her.”

“Togetha” is currently being streamed on Broadway On Demand, for free, through December 20, 2020.