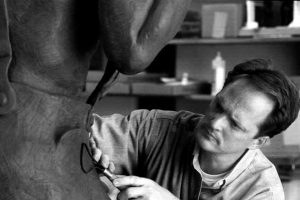 Biography: J. Kim Sessums realized he need not search for his own style. After a lifetime spent exploring his creative impulses, it found him. By age 6, he had survived the separate deaths of both parents and continued his childhood at his grandparents home on a rural Mississippi backroad. Overcoming boredom and loneliness in a small town, his imagination led to an unexpected joy of studying the character and form of those around him. Whether black, white, old, young, city folk or country their every nuance was committed to memory, recorded in written journals and then turned into visual art.

Constant artistic observation allowed him to experience the varied worlds of the rural south in ways others can not. The natural way he translated their qualities through graphite particles on paper, paint or bronze seemed to command his works to speak, occasionally sing, or even slap the viewer in the face, making them take a closer look and setting them off on their own journey into self retrospection.

Dr. Sessums was on the advisory panel for MSA that founded the school in the 1990s. He is a resident of Brookhaven and an Obstetrician/Gynecologist. He is also well known for his art work. He specializes in three areas – pencil drawing, mixed media, and bronze. His work has been commissioned nationally and is on display in homes, universities, businesses, public spaces, and museums around the country including: Notre Dame, MS State, Ole Miss, Southern Miss, Vicksburg Military Park, Shiloh Military Park, various hospitals throughout Mississippi, and museums in Maine, North Carolina to name a few.

Dr. Sessums will teach visual art classes to MSA Visual Art students each Tuesday after regular school hours at Mississippi School of the Arts as part of the guest artist residency program. For more information about this event, contact Suzanne Hirsch at 601-823-1300 or email suzanne.hirsch@msabrookhaven.org