Mississippi Songwriter of the Year Meets With MSA Students 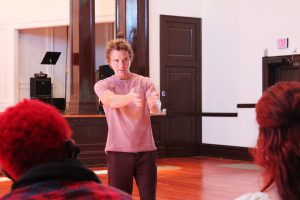 Mississippi’s 2018 Songwriter of the Year (Boswell Media), Derek Norsworthy, recently met with students at Mississippi School of the Arts’ vocal music program. During the one-day stay, Derek talked about his career in songwriting and the music industry.

Hailing from South Mississippi, Norsworthy is noted to be be an original modern artist with a high-energy show, outstanding songs, and memorable image. Derek has ventured across the United States playing in college towns, renowned venues/festivals and has opened for a number of national acts such as Blake Shelton, Miranda Lambert, Eric Church, Aaron Lewis, Corey Smith, Frankie Ballard, Thompson Square, Parmalee, Dustin Lynch, Brantley Gilbert, Charlie Daniels, Eli Young, 3 Doors Down and Alabama just to name a few.

Many may remember the “Last Chance U” football series on Netflix, where the crew followed East Mississippi Community College’s football program. During that time, Derek celebrated his third song licensing contract, writing the official fight song for the 3-time National Champion football team.

The well-versed writer has also written numerous film scores, with his most recent being aired nationally on PBS and CW Television Network.

Derek is the founder of Rep Your Roots Clothing, a philanthropic group that focuses on providing assistance to charity organizations and promoting music education to schools.

The Mississippi native has been validated as one of country Music’s Rising Stars by some of the industries toughest critics, through developing an all ages, global base.

During Derek’s appearance at MSA, students were given an opportunity to ask questions and even present some of their written songs for feedback.