Ezekiel Andrew McCall Gives Back to the MSA Community 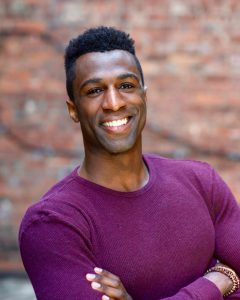 Mississippi School of the Arts welcomed back MSA alum, Ezekiel Andrew McCall. A 2006 graduate of the vocal music program, McCall is now a performing artist who travels the country as an actor/singer.

Ezekiel received his Bachelor’s degree from Mississippi College and Cincinnati Conservatory, and a Master’s from the University of Southern Mississippi.

Ezekiel met junior and senior MSA students on February 18 and began teaching masterclasses during his stay. Between fitness workshops and activities, as well as encouraging talks, the experience was like none other. The culmination of his short-time residency was a dinner theater performance, a benefit event to raise funds for the Mississippi School of the Arts Foundation. The MSA Chorale also performed during the sold-out event.

A native of Greenwood, Mississippi, Ezekiel calls Brookhaven home. “This is home. This is the truest sense of home,” he said in a recent MSA podcast episode. Ezekiel is a recipient of the MSA Alumni Hall of Fame, joining singer/songwriter, Jasmine Murray, and international muralist, Michael Roy.

Over the course of his career, Ezekiel has played in major productions such as “Beauty and the Beast,” “Phantom of the Opera,” and “Ragtime.” According to the podcast, he has recently launched his biggest contract yet, performing in the musical “Cats” as Old Deuteronomy on the Royal Caribbean cruise line which is set to sail later this year. The experience will keep him on the ship for a year-long venture, cruising the eastern and western Caribbean chain of islands.