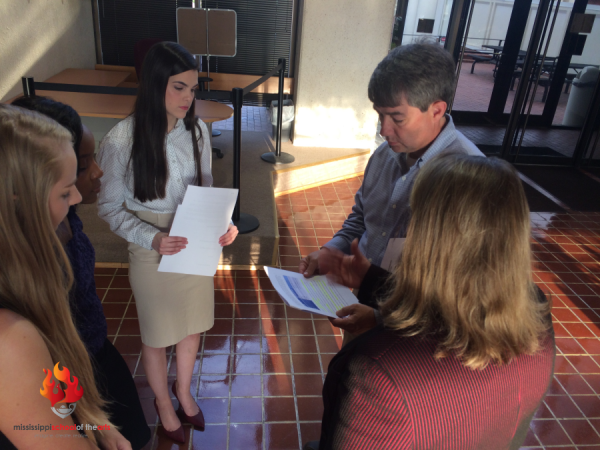 SGA representatives met with the city engineer and Brookhaven City Council about a possible crosswalk and/or school zone. Currently, MSA is not in a posted school zone.

The Mississippi School of the Arts Student Government Association takes an active role in the campus operations and makes appeals to the administration for their needs. As a part of their requirements, each SGA member is required to write a bill to benefit the campus and present it to the administration. In April 2018, Daria Fisher, Celeste “Cowley” Garrett, and Margaret Boyd submitted a written appeal to the MSA administration for assistance in getting a cross walk from the campus to local merchants and school zone designation around the campus. Suzanne Hirsch, Executive Director, contacted Brookhaven City Council members to investigate the possibility.

Upon recommendation from Fletcher Grice of the Brookhaven City Council, Hirsch applied to be considered part of the agenda at the next meeting. On May 1, 2018, these three SGA members appeared before the Mayor and City Council members to appeal for the cross walk and school zone designation. As juniors at MSA, these young women had a succinct presentation with facts and figures to make their case.

Boyd, a Vocal student from Carthage, MS, stated that in a count of one 7 day period at MSA, there were 393 checkouts to walk to merchants Piggly Wiggly, Dirt Cheap, Donut Palace, or Golden China. If that is multiplied by the number of weeks in one year that students are on campus, MSA students made 14,148 trips walking to this area of merchants. Due to residence space, there are only 140 students enrolled at MSA in a given year.

Fisher, a Dance student from Jackson, MS, presented a sample student schedule explaining the short time frames the students have to make it to these vendors between school schedule which ends at 5pm and rehearsals that tend to start at 6pm. Additionally, she stated that there are no school zone or children crossing signs around the campus to protect the students. The students go to these vendors to spend their money in the limited time they get between functions on campus.

Garrett, a Dance student from Philadelphia, MS, presented options to the Council to ask them to consider a traffic light at the intersection of Brookway Boulevard stating it would prevent the focus of the driver from behind at the yield sign. She said a second option would be a cross walk at the yield sign and school zone signs.

The students asked the council to consider their appeal for the safety of the students in the future. A follow up by Suzanne Hirsch to the Mayor and council members stated that the city engineer is investigating these options at this time. Hirsch said of these students, “This has been an issue since the opening of MSA and a valid request from our students. I am proud they had the courage to present this on their own to the council. These students articulated with a factual and compelling case to the City of Brookhaven and learned how to advocate for their needs on a higher level than our campus. How exciting to be a part of changing your school and community in such a positive way!”