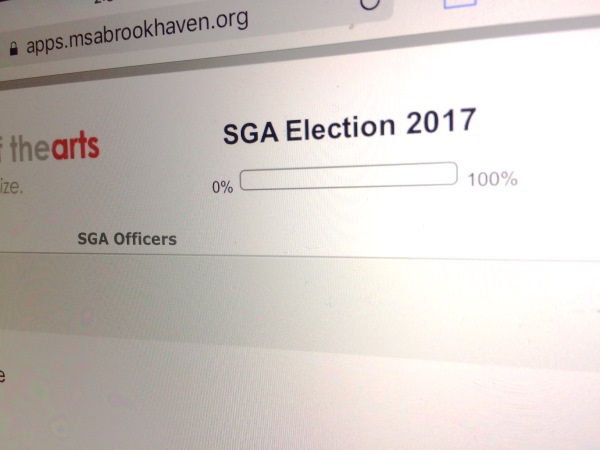 The Student Government Association recently conducted a school-wide election utilizing technology and preserving time and resources. How? By conducting the election online. MSA Technology Department set up the avenue for electronic balloting through a secure link on the school’s server system.

“MSA has participated in electronic surveys before, but to my knowledge, this was the first time for a sophisticated election such as this.” said Patrick Brown, the school’s Technology Coordinator. The election started Friday, September 1st and ended Tuesday, September 5th. Students were able to login from any internet-connected device (including smartphones) to access the election ballot.

Prior to the vote, election officials had questions about the validity of the votes: How do you keep a student from voting for a position they are not allowed to vote for, such as a floor they don’t live on? How do you prevent them from voting twice or on more than one device? Each student received an email with a personalized link. This link was relative to a specific office the student could vote for, their living floor and arts discipline.

For example, Jenny is a junior visual art major who is also a residential student living on the 5th floor. Jenny would be allowed to vote for Vice President since juniors may vote for that position. Jenny may also vote for 5th floor representative only and junior visual art representative only. The election system has the capability of determining that factor through algorithm checks. In addition to this, once Jenny submits her electronic ballot, the election ballot link expires, preventing a repeat election vote.

“The algorithm has to be set up right or you will experience problems.” said Brown. One such problem occurred. According to Brown, the initial start of the election experienced a problem when junior theatre students could not vote for their own arts discipline representative. “After I received a report of a student not being able to vote, I realized I left out a condition that told the election ballot ‘hey, she’s a junior theatre, so let her vote for junior theatre representative.’ That was quickly fixed, though, and we allowed junior theatre students to cast their electronic vote in that section.” Brown said.

According to election officials, the entire process was a success with 80% of the student body submitting their completed ballot. Results were provided instantly since the system automatically calculates votes as they are received. Future use of the system for election day is anticipated.